This guide supports the Model United Nations participants by providing links to background and organizational information. These resources may also be of interest to students in the Political Science International Organizations class. 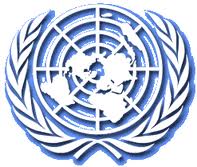 The United Nations -- It's Your World!

Be sure to take a look at the Chart of "The United Nations System" at https://www.un.org/en/delegate/page/un-system-chart

Structure of the United Nations

Users can more readily access and utilize UN information if they understand the structure of the organization.

The General Assembly is the main governing body of the UN and is composed of representatives from all member nations(currently 192).  It establishes policies for the Secretariat, receives reports from the organization's sub-bodies, approves the organization's budget, and appoints the Security Council's candidate for Secretary-General. It delegates most matters to its six Main Committees.

The Security Council attempts to maintain international peace and security. Any one of its five permanent members--France, Great Britain, China, Russia, or the United States--can veto a decision of the Council. Ten other members serve two-year terms.  The Council sends peacekeeping missions to conflict zones with the consent of the governments involved. It may enforce its decisions with economic sanctions or even military action.

As the largest UN body, the Secretariat supports other UN entities and administers their programs. Its activities range from conducting studies to administering peacekeeping operations.

The Economic and Social Council (ECOSOC) coordinates the UN's economic and social programs and works with the Specialized Agencies and hundreds of nongovernmental organizations (NGOs) whose goals coincide with those of the United Nations.

The International Court of Justice (ICJ)--also known as the World Court--is the UN's judicial arm. Its judges are selected by the General Assembly and the Security Council. Only national governments can be parties in cases brought before the ICJ.

The Trusteeship Council was created to hasten the end of colonialism. By 1994, it had fulfilled its mandate by helping to bring the last of eleven Non-Self Governing Territories to self-government, and it is no longer obligated to meet regularly.